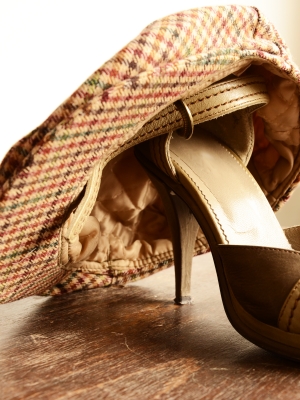 The belt buckle jangled as Pastor Dickie hoisted his pants waist up and over his protuberant gut.

With four fingers, he briskly tucked his shirt tail in, all around him, until it lay flat between his brown, hairy skin and brown pants. The white washrag he dragged from his back pocket absorbed the sweat gliding down his temples and beading across his forehead from the summer heat . . .the sin heat.

“So when mi mus’ come back, Pasta?” The bony-kneed woman sitting on the settee asked dryly. She couldn’t have been older than 25. Sparse, weaved-in tendrils hanging stiffly from her scalp overwhelmed her tiny frame.

The black synthetic hair had been purchased from Miss Murray’s shop in Cross Roads during a buy-one-get-one-free, closing-down sale. After 10 long years of waiting for an immigrant visa, Miss Murray had finally received a call from the US Embassy for an interview. A call to greener pastures.

“When must you come back?” Pastor Dickie repeated, enunciating intentionally and opening the blinds to catch the breeze wafting in from the church parking lot through the louvre windows.

She stared at him.

He cleared his throat and smoothed the collar of his blue shirt. “One week from today.” Why had he allowed himself to descend into carnality—and set up permanent residence there?

“Miss Murray sounds like she’s getting through with her visa?” he enunciated.

“Her family filed for her a long time ago?”

“You realize you’ll have to convert and get baptized?”

She looked perplexed. “Chroo Miss Murray get choo wid ‘ar visa?” She checked her blouse-front to ensure the buttons were done up right.

“No, nincompoop! And the word is pronounced through, not choo.” In his mind, he lay full blame at her feet for his . . . fall—again.

“You want to know if I took my blood-pressure tablets?” He exhaled long and hard. Why had he confided in this ghetto simpleton about his health?

She rolled her eyes. “Nuh dat mi seh.” She rose from the settee, joined him by the window and ran a hand over the fuzz covering his head. “The greys a come up back.”

He flinched at the touch of her fingers and side-stepped a few inches away from her. “I’ll stop by the barber, weekend, and sort it out,” he responded. “So when are you getting baptized?”

She cut her eyes at him and gazed through the louvres at his four-wheel-drive truck, the only vehicle in the parking lot. She sighed. Too much truck for one wrinkle-up, ol’ pastor.

“You’re not getting any younger you know, Percilina,” he warned.

“I’m not old!” He pouted. Why had he shared his fears about aging and his dreaded 79th birthday, which was around the corner?

“Me young.” She glimpsed his gold watch stuck between the seat cushions as she stood by the settee. “I want to live out my life, enjoy myself firs’. Earn some money.” And buy a watch. And rent a decent house. And buy a likkle car.

“I’m tired of telling you, age and money have nothing to do with it. What does it profit a man to gain the world and . . . ” He changed his mind. “When Jesus calls, you must answer.”

“Mi nuh hear Geezas a call.” She flitted her eyelids. “Your mouth alone me hearing.”

Pastor Dickie folded his arms and studied the muted patterns in the ceramic floor tiles. The others usually played his game, kept their mouths shut, kept his secret. He wasn’t so sure about this one anymore.

He needed to throw himself a lifeline out of this manhole.

Maybe he could marry her. Force her to eat and get fat. Sculpt her into first-lady material. Tell the congregation he’d plucked her from the enemy’s claws. What a testimony that would be! “You need to stop going to Weddy Weddy and start dancing for Jesus, start walking the straight and narrow,” he admonished.

“Not a ting wrong wid likkle dancing,” she retorted, abruptly dropping her bottom low to the floor, gyrating up, then forcing a laugh to mask the ever-present shame she felt about her livelihood.

“You dancing for the devil is no laughing matter.”

“Me not dancing for no debble,” she snapped back.

She slapped her hip with a hand. “Is who yuh calling debble?”

“The word is devil.” he enunciated, pausing after each word and exaggerating his mouth movements.

“How yuh loud so? Yuh tink you is on di pulpit, tryin’ to frighten yuh congregation?” She snatched up her handbag, slung it over a shoulder and inhaled deeply to calm the sudden onset of nervousness. “That don’t work wid me.”

Why had he joked about the congregation, the deacons, the elders—all the yes-men? With her?

“Don’t know why you have to gwaany gwaany soh,” she grumbled.

“Gwaany gwaany?” He felt utter contempt for her now. “Is that a term you learned in school? Didn’t they teach you English?”

Darn ignoramus, he fumed. “Well, if you want to reach anywhere with this pastor,” he put his foot down, “you better start speaking properly.”

“I will speak propally when I feel like.” She sauntered over to the office door, ankles wobbling in her five-inch-high heels, tight skirt riding a little further up her thighs.

“And stop wearing your clothes so tight . . . and your boot heel so high . . . and the one bag a cheap hair on your head,” he threw his words at her.

She turned around. “Anything else, Pastor Dickie?” she mocked.

Percilina burst out laughing to hide her shame. “Me will stop when you stop come.” She pulled open the door and slammed it shut behind her.