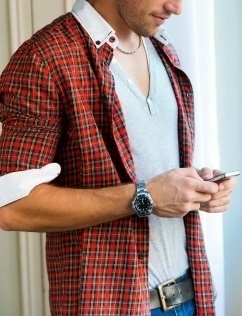 “So yuh cheating on Horace now.” Drew handed Janet a glass of freshly blended mango juice with a squeeze of lime and sat beside her on his aunt’s sofa.

“With all that giggling and kissy-kissy business last night?”

“The old man you had kissing up your hand like him frighten fa yuh.”

“Oh.” Her voice dropped. “I really didn’t expect him to do that.”

“So naive,” he muttered. “Tell me something. What you really find exciting in a man that old?”

“Look how the man shaky to rahtid!” Drew stretched out trembling hands, almost spilling juice on his jeans.

Janet contained the urge to burst out laughing.”How yuh lie so?”

“You look like you have a thing for senior citizens.”

“Just because I ate dinner with the man?”

“Look at all Horace now—”

Drew slurped his mango juice loudly, deliberately, and gave her a stare that said “whatever!”

“So you’re going to be seeing mister avid sportsman again?”

Janet wrinkled her nose and shook her head.

“Good. Coz womanizer is written all over him. That’s why I had to come break it up.” He pinched her cheek. “Save ma girl.”

“His mother doesn’t trust mi.” She felt bad for blurting that out.

“Oh? Well, if she saw you with Sabina Park, Kensington Oval, cricket man last night, she would be justified.”

“But how you know ’bout Kensington Oval?”

“The whole restaurant knows about Kensington Oval . . . and Aruba . . . and tennis.”

Embarrassed, she cringed. “Anyway, I don’t think Miss Clarice needs justification for anything . . . Not even a nun is good enough for her Horace.” Janet felt worse and wished she could suck back in that statement. Her own mother didn’t have a clue about her marital issues. Miss Petula had an ignorant side that would don boxing gloves and instigate a fight at the drop of a hat.

He chuckled. “Well, if you decide you can’t bother with Horace, I’m here.”

“Oh, please!” She slapped his arm with the back of her hand. “So why you not married yet?”

“Waiting for you,” he grinned slyly.

“You go on think it’s foolishness.”

Janet wasn’t certain if he was serious. He had a way of taking bad things mek laugh. “You want Miss Clarice come hunt me down?”

“I’m not going anywhere with you.” She cut her eyes at him.

He stood, leaned down, pecked her cheek quicker than she could object and took their empty glasses to the kitchen sink.

Janet got half way to Negril in Drew’s white Audi before he told her to pull over and give him the wheel.

“I could push the car and still reach faster than how you driving,” he teased. “Yuh drive like an old lady.”

When they reached Negril, he made a courtesy call at a boutique. It gave Janet a chance to browse through and see what fragrances and sterling-silver jewellery were on display from Drew’s product line. Flipping through racks of casual dresses, she listened in on the sales talk between him and the female owner.

“If you see anything you like, try it on. Have a ball!” the owner called out in her English accent. “There’s a small fitting room to the back.”

Why not? Janet smiled. After having children, shopping had surrendered its pleasure-activity status to become a back-to-school chore. She selected four dresses and went around the back.

Horace had never yet waited for her outside a dressing room. But Drew did and appeared to be having a whale of a time critiquing and rating her body in each dress as she modelled and posed.

Drew did other things strait-laced Horace would not do.

In Negril, he stopped at a roadside shack by the sea and bought two jelly coconuts.

Janet struggled to finish the water in hers. “Woi! Can’t go no more,” she breathed heavily.

Drew pulled the coconut from her hands and instructed her to tilt her head back and open her mouth wide. He tried draining the rest of the water in. A little ended up in her nose, some dribbled down her chin and the rest blew off with the sea breeze.

The vendor hacked off makeshift spoons from the husks and split the coconuts in two with his machete. They scraped out and ate the tender, luscious jelly.

In Hanover, outside a restaurant and bar, they sipped piping hot cups of fish tea and exuberantly debated the state of the economy with a few patrons. In the heat of the debate, Drew rose, purchased two bottles of Ting and told her it was time to hit the road again. They drove straight to Montego Bay.

Stepping over construction material and walking through sawdust in the new store, he shared plans for the decor with her, above the noisy drilling and hammering. Satisfied with the progress of the renovation, he led Janet to a relaxing, air conditioned coffee shop in the plaza, where they indulged in natural fruit smoothies and paninis.

“This is good stuff.” He selected a huge slice of mocha-chocolate cake from the display case for her and paid the cashier.

Janet mourned in advance for the extra jiggle it would add to her thighs and pinched his gut in revenge. But there was hardly any gut to pinch. His abs were as flat and steely as an ironing board—exceedingly flatter and steelier than hers. “It’s a sin,” she lamented.

Within the hour, she was back at her suite, frazzled, on top of the world . . . yet sad.

She brushed her windblown hair into a ponytail and covered it with a shower cap. Stepping into the shower, she tried to remember the first time she met Drew. It had been at the bank where she’d been hired as a teller at 18 years old, unable to afford university. He was the son of money-people, the bank’s customers, who had jewellery and clothes stores under their belts.

Her second Christmas at the bank, he’d spoken to her for the first time. His parents had asked him to deliver a gift box with a pair of earrings from his father and a silk scarf from his mother.

The following Christmas Eve, he’d decided to kill two birds with one stone: deliver his parents’ gift plus invite her to a Christmas tree-lighting ceremony at his alma mater. That had been their first and last date, the first and last time he kissed her, the first time he was finding out about Horace and her last Christmas at the bank before the redundancy exercise.

A year ago, he had coincidentally re-entered her life, through her spa doors. It couldn’t have happened at a worse time. Doubts about her marriage, a marriage that took place after an eight-month courtship, had been swarming about in her mind.

This afternoon, Drew had told her that he respected her marriage and her children, that he was satisfied with a platonic relationship and that he didn’t subscribe to being a home-wrecker.

Janet buried her face in her washrag. Why did she marry Horace?

Because he’d paid attention to her?

Because he’d spoken to her nicely?

Because she’d gotten from him in eight months what her mother couldn’t get from her father in 20 years?

It hadn’t dawned on her that she was marrying a man eerily similar to her father until they were under the same roof. Horace behaved as if cooking and cleaning were cardinal sins—for a man. He didn’t show emotions well either.

On the other hand, he was even-tempered, rational . . . and a little monotonous, latching on and choking the life out of the tried and true. Like black coffee and oatmeal porridge for breakfast, morning after morning. And post-office-blue, cotton shirts, day after blessed day. And Fort Clarence beach, Easter after Easter, after blessed Easter. Poor Janine didn’t know any other beach in Jamaica besides Fort Clarence.

But he works hard, she consoled herself, and he makes me and the children feel safe and protected . . . except from Miss Clarice.

Phone calls from Clarice had a special ring—it seemed. The very atmosphere seemed to walk on eggshells when her ringing disturbed it. And every time Horace hung up the phone, he did so with a new concern about Janet’s mothering style.

Tears streamed down Janet’s face as guilt rode her chest.

Mothers weren’t supposed to have regrets. Having regrets was tantamount to saying she didn’t love her children.

Not true, she reassured herself. God knew she loved her children. She would’ve preferred to have had them later in life (with someone else), but she loved them.

Janet abruptly turned off the shower and listened. There was urgent knocking at the door. Her phone was simultaneously belting out a dance-hall ringtone (Miss Clarice would faint).

She wrapped herself in a towel and ran inside the bedroom to the phone. It was Drew. He was at the door. They hadn’t had dinner yet, and he had an appetite for curry goat from a quaint restaurant he’d discovered in the town.

“Yeh, I’ll come,” she answered on the phone while opening the door for him.

Drew stared at her, eyebrows cocked to the high heavens. A lean smile unfolded across his face.

Janet looked down, shamefaced. She’d answered the door in a towel.